skip to main | skip to sidebar

Houston, we've got weather.
(I know, I know, big deal. I just wanted an excuse to take a picture of these rain boots.) 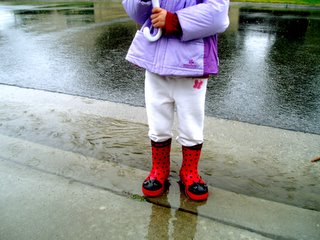 OK, so what I’ve realized is that getting my very own blog site definitely hasn’t made me a blogger. Damn. I was so hoping it would be that easy. And I was all hyped up about limiting myself to once a week. And here I am, weeks later, postless. There are a million reasons why I haven’t written but I do have an excuse du jour. My “used to be a great sleeper” 2-year-old has pulled a 180 and is playing the “Hey Mom, Let’s Pretend I’m a Newborn Again” game and has been up several times a night over the last month yelling out to me to rub her back or cover her up or wanting to watch a show at 4:45 in the morning. It’s just not right. And now after an extended period of time with sleep deprivation, I’m not right. I’m all wrong as a matter of fact. I feel it’s legit.

Next time I’m sure I’ll have a different excuse but I can guarantee you whatever it is, I’ll be blaming it on Motherhood in one way or another. It’s only my third post and I’m showing all my cards people- here goes- I am a mother of two incredibly amazing daughters who on a regular basis has a hell of a time being the mother of two incredibly amazing daughters.

I’m sure many mothers out there know exactly what that means and can commiserate. And for that I am grateful. Over the last few weeks I have been totally enraptured by some of the mommy bloggers I have come across. I am inspired beyond words and giddy and thankful and relieved and amazed at the honesty, humor, and gravity of all that is being written and shared. It is utterly mind-blowing. I have loved every minute of discovering this new world, this oddly comforting virtual support system. How much more surreal can that be?

So now my goal is to learn how to better use the tools of this blasted site and get links to these incredibly courageous women listed on my little blogspot. And, alright, maybe a few hundred pictures of my unbearably gorgeous girls. Did I mention they are smart and witty and charming too? My 8-year-old wants to be a scientist and my non-sleeping toddler pointed to Dora in a doctor uniform tonight and stated she wants to be"that".
Beauty and brains. Gotta love it.

My throw up hurts.

It's Friday night and the house is quiet. Daughter #1 is away at cowgirl camp, daughter #2 is asleep, no stirring, no wait, asleep, and husband #1 has probably just cracked beer #2 while enjoying his weekly golf night with the boys. No, there is no husband #2.

I'm usually content with having the house to myself on Friday night but not tonight. Some of my favorite kidless friends are out having drinks at a beach front candlelit bar, relaxing on rattan couches, sucking down lemon drops and talking about, without a doubt, all things grown-up and cool. Damn. Let's just say tonight I'm a little over being held hostage by a snoring two-year-old.

I had debated all week about what I would post tonight, declaring Fridays as my new blog writing night, as thoughts and topics raced through my mom-brain at warp speed. I had it all planned out. You know, like when people are convinced that they are going to have 3 or 4 kids before they even try one on for size. Talk about confident (and clueless). It looks like tonight the message isn't going be much more than "cranky happens". And it happens to me a lot, especially when I'm over-tired, hormonally heightened and deprived of a life beyond domestics.

So, I guess I'll go sip some tea now because "my throw up hurts" too (which is toddler talk for "my throat hurts") and which by the way had to be translated by a mommy friend of mine because when my daughter kept repeating it, I had no idea what she meant. So much for speaking my child's language. Sheesh.

tracey clark
Photographer, writer and mother. Is there time for more?

my other virtual homes

Hey, Listen to This